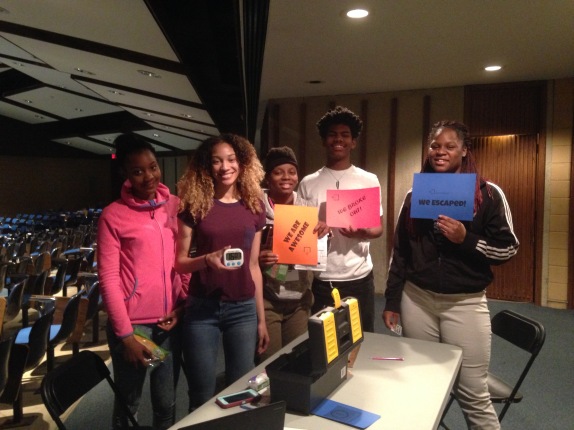 I have been intrigued about BreakoutEDU ever since I attended the ICE Conference back in February.  It is crazy how sometimes you are just in the right place at the right time.  I happened to be walking past the Breakout room during the last session on the last day (contemplating whether I wanted to stay or go home – let’s be real here, I mean it was the last session of the two-day conference and I was TIRED – buuuuut I have never been more grateful to be the type to “do the right thing” and stay until the end until this experience).  We did the Time Warp Breakout and I had no idea what to expect.  As soon as I saw the box with the various locks though I was intrigued.  I was amazed at the teamwork involved to solve the various puzzles.  Also, I learned a lot about myself and how I need to work on the idea that it’s ok to not have all of the answers and to let go in the process and let others work.  I always feel the need to be involved with everything and when it came to this box 1.) you COULDN’T POSSIBLY be everywhere and listening to everything at once and 2.) even if you COULD it wouldn’t be beneficial to the team.  The learning from this activity for me on a personal level was so much more than the content involved in the puzzles.

The experience stuck with me and I really wanted a box (cost is over $90 and I don’t like to spend more than $20 at a time for school supplies).  I finally broke down and open sourced the items through Amazon – link to the list is here (about the same price as the real box but I would get it in two days J because of Amazon Prime and I would have a new tool box as opposed to the wooden one that BreakoutEDU offers which I thought would be more usable in the long run if I decided that BreakoutEDU didn’t work for my students).

Then I set off to find a game for my students.  I browsed through the games and I liked several but none really hit the mark with what I wanted my students to experience (some were too content heavy and I knew I would be helping students CONSTANTLY with that or some were too content light and I felt like I would be neglecting my duty to teach content to my students too much).  I decided to make my own game which in itself was a HUGE undertaking.  All in all I probably spent about 6 hours making my game – but if it gets published I will get a nifty tshirt and I WANT the tshirt.  After two published games you get a box 😀 so that is my next goal.

The six hours quoted above is because I wanted to do everything in my game and I had to really hold back or my students would STILL be working on puzzles.  I eventually settled on a music and math theme (the math is related to the area formulas that we just finished learning in class).  It was so fun to have the open creativity to do this game (I haven’t felt this way about an activity in a LONG time).  The creativity is also daunting because every idea you have you need to make it work and THAT was mind boggling sometimes.  I asked my tech guru administrator (shout out to @MisterAbrams) to come in and walk through the game with me and that was immensely helpful with finding the flaws and kinks that needed to be worked out.  Then I had another small group of admins and teachers come in and walk through it again.  Then I felt ready for prime time with my students… scary and exciting all at the same time.

The real “test” came when I let my statistics students try out the game.  I showed my students the video on how to open the locks and then escorted them into the auditorium.  I didn’t give them much more than that. They “broke out” in 29 minutes – HOWEVER – I did help them with the area formulas that I knew should be easy for my sophomores and in hind sight, I should’ve just let them look those up online.  I was not surprised on the parts that made them struggle as I had seen those same struggles with the admins and teachers who did the breakout.  I was surprised at how much I learned by proctoring the activity.  I never realized how much I “jump in to the rescue” for my students and how I need to sit back and let them productively struggle.  I was surprised how much they would be “almost there” and would fall short but that they would persevere anyway (I don’t see that step because I don’t want my students to fail and after one “fail” I usually step in and show them how, I need to let them fail and maybe let them fail again).  I was amazed to see the different groups emerge as they worked through the various puzzles.  I would not have predicted who would work with whom.  It was the first time in a long time that one of my students was honestly successful in my class and subsequently the first time in a long time that I saw her smile.  I was afraid at first because my strongest student was not in class today, but again, everything happens for a reason and my students remarked “well if she would’ve been here today, she would’ve just done the whole thing for us”, and that spoke VOLUMES about what class is usually like.  I’m so proud of my students for their perseverance.  I loved the team work and I need to harness that for future endeavors.  I am proud of myself for investing the time and energy into this activity and putting myself out there – not typical for me, as I like every detail to be planned.  I am excited to make my next one and hope that this one gets published (now to go work on the video to help get it published).